I’ve got two full weeks until the release of Hope Is a Ferris Wheel, so I decided to do some process posts. There’ll be one every weekday!

So, the way I write a story is that first I draw out the characters. I draw them until they’re very clear in my mind, because when they are, they start to interact with their environment and tell me (indirectly) about their stories. These drawings usually start as classroom doodles. Things I doodle during a lecture or what have you.

(Now that I’m not in school, I do a lot of doodling on my iPad while watching TV. Closest I can get.)

So, I’m starting with STAR, the main character of Hope Is a Ferris Wheel.

Star was actually not the first character I had for this story – Eddie and Denny came before her. But they weren’t doing much until Star came around. 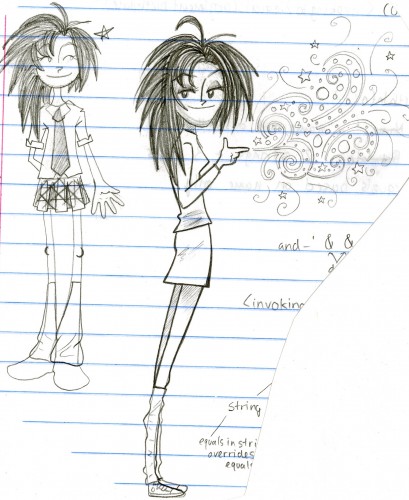 The girl on the right is the very first drawing of Star I ever did. (You can see some java notes on the far right of the notebook paper; I drew this during a computer science class. I’m almost positive it was early 2007, but it could have been late 2006.) She started out a bit older, as you can see, but when I did the drawing on the left immediately after I made her a bit younger and that seemed to fit her.

You can see a small star right by Star’s head in the drawing on the left. I believe I made that star so I would remember to figure out something with her later, but looking over my notes at the end of the day, I decided that “Star” was a good name for her.

Now, what in the world was I thinking with her hair? I have no idea. But I do know that, looking at the picture later, I said to myself, “In the drawing, that looks kind of cool, but in real life that would totally be a mullet.” (I was thinking a flashy David Bowie type mullet.)

I decided to go with that. A young girl with a mullet. Named Star.

That’s where it all started.

I guess Star’s mullet is midnight blue because of this drawing. My original idea for Star (and here, she’s a sixth-grader, not a fifth-grader), was that she was a somewhat-streetwise trailer park denizen who knew a lot about things like make-up and hair products, and who tried to act more mature than she was, even though she was still a child and very naive. (Hence the eyeliner and the high heels.)

And yeah, she was a sixth-grader. I originally put her in this story I was working on about a sixth-grade class of kids, who were known as the “bad class.” Star was a side character who would brag about her life and how cool she was, not realizing that it wasn’t actually cool to live in a trailer park.

I also had this character named Denny, a timid, nervous kind of kid, who I’d drawn and named right before Star. So naturally, they became connected. I thought it’d be funny if they were enemies, and then I had to figure out WHY they were enemies, so I decided that Star was friends with his sister and was constantly over at their house, driving Denny crazy. (More about Denny and his transformation from timid to glaring in another post.)

The more I drew Star, the more I got to understand her mullet and the way it worked. For a while, it was kind of curly. And though I often imagined her in skirts, she sometimes made appearances in straight-legged jeans. 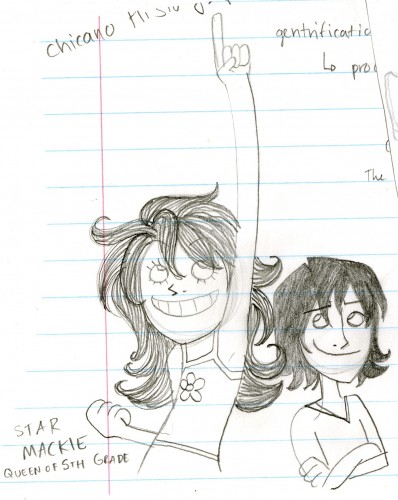 One day in 2008, during a lecture in my History of Latinas/os in 20th Century California class (as you can tell from the terms “chicano” and “gentrification” up there), I drew this picture of Star and Genny. I liked the way Star looked like she’d achieved something great, so I added the caption at the bottom, which eventually became the working title of the book. I made Star a 5th grader here because I’d made her hair a little different, but then I thought it could be a good “origin story” for this side character. The two things I’d need to cover in the “origin story” were:

1. How Star and Genny met and became friends

2. How Star ended up being placed in the “bad class”

So, I started working on that. In my head, not on paper. I decided early on that, despite my love of YA, this would be a story for children. (Like the children I was working with at the time as part of my work-study job.) 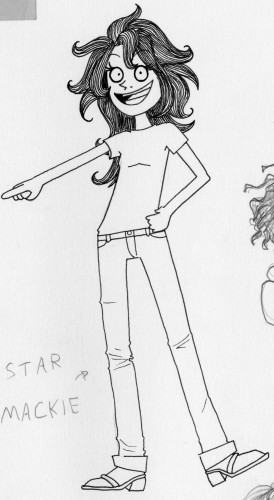 In my sketchbook, I drew a page devoted to Star Mackie: Queen of Fifth Grade, deciding which characters from the aforementioned Sixth-Grade Delinquents story would make appearances. Genny and Denny, obviously, would need to be there, and I also decided to put Eddie in. There were some other characters on the page who either didn’t make it in or did and were cut later. (I’ll cover those characters in a different post.)

Star had always had a sister. She was a vague figure in Star’s life until I started doing Star Mackie: Queen of Fifth Grade, and then she became a full-blown character. More on her later. For now I’ll just say that Star’s sister, Winter, became an extremely important part of the book. In fact, there was a vague side-plot in the Sixth-Grade Delinquents story regarding Winter that I moved into Star’s origin story. But you have to read the book in order to know what it is.

Anyway, note in this picture that Star is wearing high heels and that they are too big for her feet. That’s because they’re Winter’s. (And Winter is wearing the combat boots that Star now wears in Hope Is a Ferris Wheel.)

Eventually Star’s mullet became a bit more streamlined, which is what happens when you draw a character over and over again. She was in combat boots full time now, too, due to a comment I received from my would-be editor, Tamar, about the high heels making Star feel too mature. There was an entire plot thread of Star wearing high heels and gradually moving to Winter’s combat boots, so I decided to nix that and just put her in the combat boots from the beginning. Made some things a lot easier.

Here’s a somewhat more recent picture of Star. I haven’t drawn her a whole lot since getting the book deal, sadly! I was also experimenting with some different footwear for her (these are called “Skull Mary Janes” in my notes), though that never panned out. You can now make out the separate layers in her hair and see how it can be viewed as a mullet. As far as I’m concerned, it’s totally a mullet and Star is in denial about it, but some readers have stayed adamant that it’s a “layered cut” and totally not a mullet even, and that’s a valid interpretation. I think there are a lot of people walking around with mullets who are in denial. Own your mullet! They’re actually pretty cool.

So, there you have it! Star Mackie was created SEVEN DANG YEARS AGO. And now her little origin story is out in the world.

It just goes to show you to keep your eye on those side characters. They’ll sprout their own stories when you least expect it.

4 Responses to Hope Is a Ferris Wheel – Star Mackie