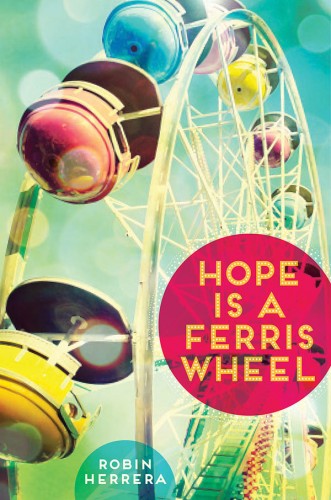 HOPE IS A FERRIS WHEEL

Ten-year-old Star Mackie lives in a trailer park with her flaky mom and her melancholy older sister, Winter, whom Star idolizes. Moving to a new town has made it difficult for Star to make friends, when her classmates tease her because of where she lives and because of her layered blue hair. But when Star starts a poetry club, she develops a love of Emily Dickinson and, through Dickinson’s poetry, learns some important lessons about herself and comes to terms with her hopes for the future.

With an unforgettable voice with a lot of heart, Hope Is a Ferris Wheel is the story of a young girl who learns to accept her family and herself while trying to make sense of the world around her.

“Herrera’s first novel is quite accomplished, with plenty of heart and humor […]  Star is a unique, determined, and loving child making the best of a bad situation; readers cannot help but root for her.” —School Library Journal, Starred Review

“First-time author Herrera, telling the story from Star’s point of view, gives readers a front-row seat to all the embarrassment and angst of Star’s jumbled life—and all of the triumphs. Here’s hoping we hear more from this author.” —Horn Book

“The author handles the Mackie family’s financial and domestic situation with delicacy and respect, allowing readers to gradually get to know the difficulties her characters face. […] Well-constructed, thought-provoking and appealing, this first effort bodes well for the author’s future.” —Kirkus

“In her debut, Herrera has created a delightful narrator with a memorable voice and surrounded her with a unique supporting cast. Got fans of Joan Bauer in your neck of the woods? Send them this way.” —Booklist

“This debut novel is well-structured with a great character in young Star. Star’s voice is both naive and wise beyond her years. Readers will eagerly follow as Star learns that people may not be only what they seem on the surface.” —Library Media Connection

Find out more and connect: